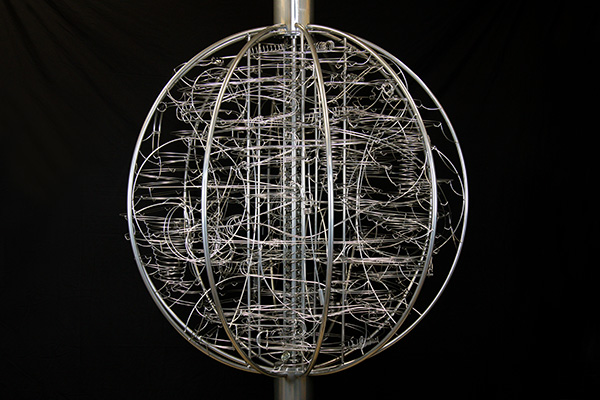 The third in the series of spheres, it measures 1.4m in diameter and approximately 2.8m tall. The sculpture has eleven track paths with interesting gates, switches, loops, spirals and plenty of other mechanisms to keep you watching for hours! This sphere contains a few new components (made especially for this sphere). One of these is a four ball collector and distributor. It handles four balls before releasing them and no matter the sequence the balls arrive, it only releases once all four balls arrive. Another, is a tipping arm balls on track. The first ball activates the tipping arm while three captive balls wait their turn to be released. The first ball then joins the queue of waiting balls. The third is a reverse tall spiral. With enough energy, the ball will travel up a tall spiral rather than down.